Today’s  post is a little different.  First, Amazons, the topic of today’s  In Our Time on R4 (Melvyn Bragg’s job is the most enviable I can imagine….).    The  link to the PP is obvious – the Amazons are after all an exceptionally  powerful example of convention-defying occupational choice .   I wouldn’t want to push it too far, but it will be interesting to see when a woman reaches the top echelons of the military.    And whether there is any discussion in that sphere over whether/how a female presence would make a difference to leadership styles, as there is over boardrooms and financial trading (and even politics….).

I went over to the British Museum ( I’m lucky enough to live 2 minutes from it) and found the vase where Achilles is in the act of killing the Amazon Penthesilea (alongside is one of an Amazon wearing the trousers – amazingly, this is  also from a 470BC vase).   On IOT Paul Cartledge told us that it’s not clear whether Achilles fell in love with her as he was killing her, or only when she was dead, but it’s an extraordinarily powerful metaphor either way. 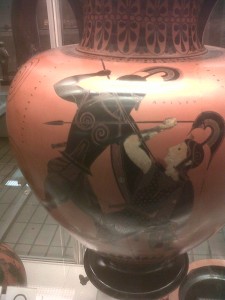 Secondly, Tuesday was the 25th birthday of my daughter  (relax Bernie, I’m not  tying you into the Amazons).   We had a really good celebration, and some discussion of how 25 is now probably as significant a marker as 21 or 18.  I’m very much of the view that we need a different set of markers for the lifecourse – a view that David Watson and I put forward in Learning Through Life.   Chronological ages are of course arbitrary to  some – rather large – degree; but I also wonder how far the advances made in understanding human development  in a number of disciplines will move us away from a universalist discourse, so that we think differently about ‘standard’  lifecourse stages for males and females.   Just a thought, for now.