It’s still August, yet there’s a steady stream of PP-relevant items appearing in the media.  More posts to follow shortly on caring grandmothers and human capital contracts.  But yesterday was a bit of a blue-letter day.

In the morning I listened to Joanna Haigh being interviewed on The Life Scientific.  She is professor of physics at Imperial College London,  has done hugely important work on climate change, and is an FRS.   She came across as authoritative but very modest.  Amongst other tributes, one of her former students gave testimony to how encouraging and non-hierarchical her attitude was to those she supervised. 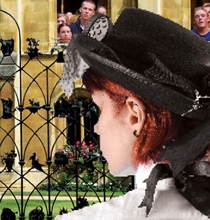 Later in the day I went to the Globe Theatre to see Blue Stockings, a new play by Jessica Swayle.  Seeing a play at the Globe always adds an extra dimension to the experience;  watching people engaged in theatre, chortling and chuckling, oohing and aahing, is a delightful bonus.

The play tells the story of the struggle by women at Girton College in Cambridge to have their presence as students recognised at all, and then to have their achievements recognised by the award of degrees.  The climax of the play is the scene where they are waiting for news of the vote being taken of the all-male assembly of Cambridge graduates.  It goes against them, and banners descend telling us that there were another 50 years to go before this battle would be won.

Two particular episodes carried particular force for me.  First is where Henry Maudsley, the renowned psychiatrist, is giving a lecture on hysteria, which the Girton students attend.  One of them, Tess, dares to put up her hand (strenuously ignored), ask a question (shock) and then dissent from Maudsley’s answer  – off-the-scale insolence, resulting in her immediate expulsion from the lecture hall.    Maudsley’s outrage is chilling.  The scene would not happen today, but  we know how bullying persists, and the comment on Joanna Haigh’s style suggests authoritarianism is still an issue.

Secondly, on the day of the vote on women’s degrees a bunch of undergraduate men parade out to Girton with an effigy of the Principlal, Elizabeth Welsh, and invade the college, inflicting a good deal of physical damage on the premisses and psychological violence on the women.  As I recall this is solidly based on historical events.  The fact that they are safely in the past, however, did not stop me from making a direct connection to the appalling recent stories of obscene violence on twitter.

The link between the two events is – science.  The pioneering women students are not, as you might have expected,in traditional female areas such as literature or language.  They are all scientists, and very conscious of this – indeed, it sets up particular stresses for them in reconciling their supposedly emotion-free studies with their social roles and personal desires.

We left thinking this is a must-see play for teenage students, of both sexes.  Joanna Haigh, and Athene Donald her fellow physics professor from Cambridge who blogs often about these issues, would make a great after-play panel.  You might like to think who would put forward the present-day equivalent of the Maudsley position.  On reflection, that would probably not make for a constructive discussion.  And it’s fair to add that one of the men – Mr Banks – sacrifices his career because of his commitment to the Girton enterprise.