Postgraduate  numbers are now roughly the same as undergraduate numbers 30 years ago. In terms of  social class the profile of today’s  postgraduates strongly resembles the profile of undergraduates then – ie strongly favouring those from  better off backgrounds.    This is why the HEC report calls it ‘the next frontier for widening participation’ – ie the challenge is to broaden the social intake at this level (not that the challenge of broadening the social composition of the undergraduate population has been solved, but that’s a different story).

What is the relevance to the Paula Principle?  The HEC report makes no mention of gender issues, and in one sense that’s completely understandable.  Women have now overtaken men at postgraduate level, as they did much earlier in school qualifications, and more recently in first degrees.  What struck me is the reference in the report to the time it takes to produce graduates in particular areas of expertise – the  ‘long pipeline’ of up to 10 years to go from A level to PhD.   My point is that we should pay attention to what happens to the pipeline after that as well – which is where the PP comes in.

The comment on the pipeline is made in relation to scientists.    Women outperform men by some margin in biological and medical sciences.  Physics is one of the few areas where men still do significantly better.   In chemistry men and women are fairly equal in initial qualifications.  Yet as several analyses have shown, women’s subsequent scientific careers show a very leaky pipeline, as women drop out of scientific work.

But the career issue more complicated than just a leaky pipeline.  The chart below is taken an article by Lesley Cohen in Physics World.  The image is one of a pair of scissors, and shows the widening divergence over time between qualified male and female scientists in the academic world.  Of course some of this is because it takes time for the higher qualifications of younger women to show up at the other end of the careers ladder.  But it still presents a powerful image of the different trajectories. Similar arguments are made by another prominent woman scientist, Athene Donald, who writes an excellent blog on this (and other issues).

Whether it’s scissors or pipelines the message is clear:  we are losing a lot of very well-qualified talent. 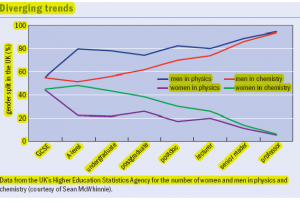