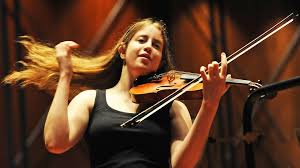 I went last night to a Prom concert.  Bruch’s violin concerto was played by  young Norwegian with the fine lupine name of Vilde Frang (having a half-Norwegian daughter entitles me to comment).  She was mightily impressive.

I was in the seats behind the orchestra, and as I watched her frizzed mane of hair vibrating to the music I     wondered how many of the younger breed of soloists, or just outstanding players, are women, and how far this varies by instrument.  Only one of the orchestra’s double basses was a woman, for obvious reasons, and none of the percussionists.  For most of the strings, it was 50/50ish.

Whatever the answer is, there’s no doubt that being a concert violinist takes a heck of a lot of hard work.   (Nigel Kennedy still starts his day with two hours of scales and Bach.)  There’s some significant work being done now by Alan Felstead and colleagues on the 2012 Skills and Employment Survey, and some of this deals with changes in how hard people are working.

Women and men were  asked in 2006 and 2012 whether they work hard or at high speeds, and whether they have control over task selection, task execution and quality standards.  The survey adds information on the use of technology, so there’s a combination of variables in play.

There could be all sorts of reasons why the jump has been bigger for women.  It may of course be a direct consequence of what is happening in the workplace.  Cuts in public service staffing will affect women particularly – though the researchers reject the link between downsizing and intensification.   (Interestingly, the ratings for public sector workers are much higher (52,5%) than for private sector workers (42.2%).  It might be to do with external factors unrelated to one’s own workplace which nevertheless increase pressure at work.  If, for example, you are worried about the increasing expense of childcare that might well impinge on your working patterns.  It might, rather differently, be a reflection of  women having  a different baseline of comfort, but that’s probably impossible to gauge, and I think I’d rather not go there.

But it’s time for another beef about how we classify working hours, and especially the division into full- and part-time.  (This is not directed at  the S&E researchers, I hasten to add.)  The line is currently drawn at 30 hours per week (35 in the US, by the way…), and so most analyses use a binary division, ie just the two categories of full- and part-time.  I read recently an interesting analysis  by Vanessa Gash and colleagues of the impact of changes in working hours on women’s happiness and life satisfaction.  They note that in general a move from Ft to PT meant an increase in satisfaction, in Germany and in the UK.  But a single dividing line (presumably of 30 hours, though I couldn’t see it defined)  prevents us from getting in-depth understanding of where the key changes occur : is it at 10, 15 or 25 hours a week, for example?

Rethinking how we define hours of work seems to me increasingly important given the debate on zero-hours contracts which has suddenly shot to the surface.   Which in turn makes me wonder how many musicians are on zero hours contracts.  Not Vilde Frang, I guess…