I’ve been lucky enough to go to two Ibsen productions in the past week: Ghosts at the Almeida and The Doll’s House at the Duke of York.  I enjoyed both, but for me the former was far the stronger, with tremendous power and a beautiful rhythm to the production.   The climax, with Helen Alving cradling her dying son Oswald, could be entirely depressing, but here we saw the sun rising as he slipped away, and although her future is hardly a bright one the visual effect was one  of some kind of redemption for them both. 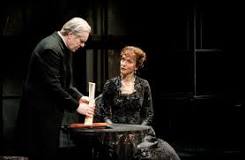 I was again amazed at Ibsen’s boldness.  In one play he tackles syphilis, hypocrisy, divine will,      class relations and of course gender.  Not bad going.  My daughter lives in Norway and I have visited  the flat where he lived and wrote.   Ibsen was a first-order celebrity; people gathered just to watch him taking his daily walk for coffee in his favourite cafe.   But when Ghosts came out there was total silence, and the play was first produced only a couple of years later – in Chicago.

The central women in both plays show us their self-development, but in different ways.  Helen’s intellectual confidence is  crucial but fragile.   She begins her discussion with the pastor Manders in briskly businesslike fashion, settling issues to do with the orphanage they are proposing to build.  She is not afraid to challenge him when he pompously expresses his disapproval of her reading,  both because of the radical ideas the books contain, and because she demonstrates independence of mind.

“Tell me, Mrs Alving, what are these books doing here?

– These books?  I am reading them.

– Do you read this sort of thing?

– Do you feel any the better of the happier for reading books of this kind?

– I think it makes me, as it were, more self-reliant.

– That is remarkable.  But why?

– Well, they give me an explanation or a confirmation of lots of different ideas that have come into my own mind.”

It turns out, though, that she is not the well-off and free-thinking bourgeoise that we might have thought, but someone who has worked her heart out to disguise and redeem her husband’s failings in order to protect her son.  Her work involves both emotional labour and financial management.  Of course, the skills gain no recognition at all, even within her own house.

Nora in the Doll’s House also has to earn money, but she chooses a different route (or maybe she has no choice):  to redeem the  debt she has lied about, she has to play up to a spendthrift image but squirrels away the housekeeping and dress money which her husband gives her.    The  climax in this case is her dramatic exit, with the door slamming behind her as she leaves her husband and her children.  We do not know how she will survive on a day-to-day basis following her liberation.