I’ve been reading Gillian Tett’s new book, The Silo Effect. The basic argument is very simple: organisations fail because people work in silos which prevent them from sharing knowledge and ideas.  Tett illustrates this with examples from diverse corners of the business world:  the New York Fire Department, Sony, Apple and the Bank of England.

Her overall argument is compelling, and most of us who have worked in organisations will recognise its application. ( This is one of the reasons why the Peter Principle was so successful – people nod their heads in acknowledgement of a broad generalisation to their own experience.)   Sometimes, the silo construction is deliberate.  This does not only occur because there may be financial or career incentives for staff  to keep things to themselves. People refuse to share information because they are cussed, lazy, or just enjoy putting one over on their fellows.

Tett’s book is also a brazen plug for anthropologists.  As she explains, she was herself a fully trained anthropologist working in Tajikistan before she was, rather implausibly, recruited to the Financial Times.  She realised how her anthropological training – observing the ‘other’ – brought her insights into the ways the world of finance works – or doesn’t work.

I buy almost all of her arguments.  Sometimes think she does a little too much of a selling job for her discipline ; it’s almost as if she’s constructing boundaries to mark it out as superior, which would be a little paradoxical, would it not…

I also think she lets off our financiers too lightly.  She makes the story of their involvement in selling huge excesses of sub-prime mortgages sound like an organisational issue, as if it had nothing to do with gross greed and arrogance.

But the PP-relevant question raised by her book is this:  is there any case for thinking that women are more likely to be silo-crossers than men are?   Of course this would be a crude generalisation.  You could argue  just the contrary, that men are more disposed  to risk crossing boundaries and breaching conventional divisions.  And yet I think there is a case to be made that women don’t naturally put things in separate boxes (e.g. their apparent distaste for binary, hard-logic divisions, and greater tolerance of ambiguity).  They are, maybe, more likely to think of  sharing information with colleagues.  They are, almost certainly, less driven by personal incentives. 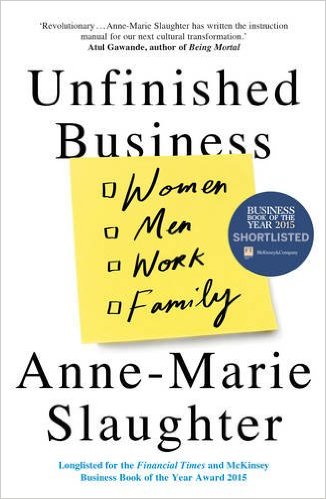 Anne-Marie Slaughter’s Unfinished Business: Women, Men, Work, Family, is a very different book, but with interesting connections to Tett’s thesis.  Slaughter was already a high-flying professor at Princeton University when Hillary Clinton asked her to be director of policy planning at the State Department in 2009.  She served for two years, and then decide to return to Princeton at the end of her leave of absence.  So far so glittering, career-wise.  But Slaughter then wrote an article in Atlantic magazine, ‘”Why Women Can’t Have It All”, in which she said that a, perhaps the, main factor in her decision to return to academic life was the need to be with her teenage boys.  The older boy was showing signs of going off the rails, and the younger was not happy with her absence.  Despite having a husband who had the time, capacity and willingness to take on the main caring role, Slaughter decided her priority lay with her children.

The gender roof more or less fell in on her, with accusations of betraying her sex, setting the cause back and so on.  So she’s written this book, not so much as self-justification but in order to help others wrestling with decisions which, if not at the same exalted level, are nevertheless similar enough.  She draws on the very wide responses she had to her article and her subsequent speaking engagements to broaden out her arguments.   It’s a good read, with many telling insights.

There are direct connections with PP  and with the Tett book.  Chapter 5, ‘Is Managing Money Really Harder Than Managing Kids?’  is not a simple comparison of which type of activity is harder but explores what you might call the transferable skills involved in bringing up a family.   Slaughter is, naturally, arguing that men can learn to do more of the kid-management, just as women are doing more of the finance-management.  She cites studies showing that in finance especially male traders focus on short-term gains, whereas what is needed is long-term strategic thinking.  This is exactly the same line of thinking as Tett’s:  how organisations (public or private sector) can get a better balance in the range of skills they deploy.