Two separate items from this week which exactly confirm the divergence that is at the heart of the Paula Principle.

First the ‘End of Cycle’ report from UCAS shows women moving even further ahead.   (By the way, what does “UCAS’ stand for?  Universities Commission on Admissions and Statistics?  I couldn’t find it on their site.)    The entry rate for 18 year old women is 9.2 percentage points higher than for men, making them 35 per cent (proportionally) more likely to enter than men. These differences, both proportional and in percentage points, are the highest recorded. 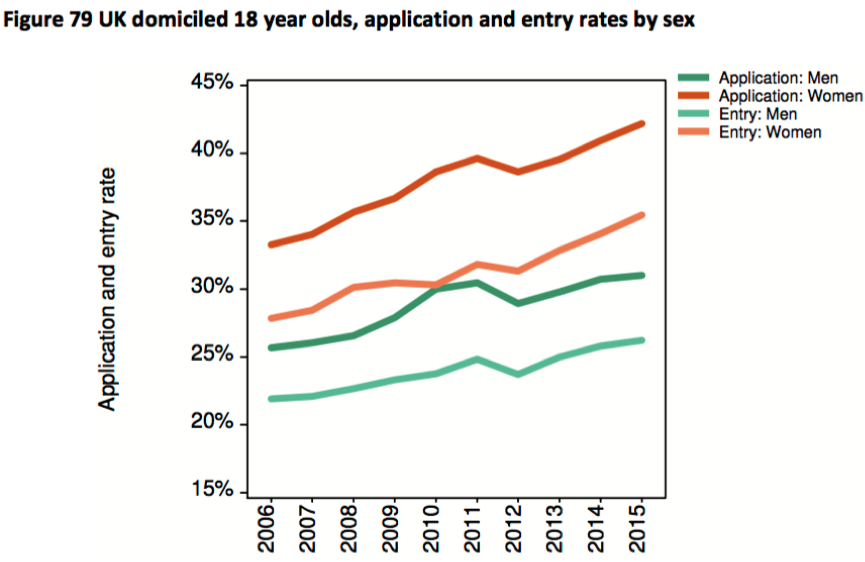 Another very significant point is that this effect is even stronger when it comes to disadvantaged groups.  Women from poorer backgrounds were 52 per cent more likely to enter than men in 2015.

On almost the same day, Ann Francke of the Chartered Management Institute gave evidence to the Commons Select Committee on Women and Equality.  She pointed out that the gender pay gap for women over 40 is 35%.  Not only that, but it’s going in the wrong direction – it’s higher now than it was 10 years ago.   Gender equality is low when young women and men enter the labour market.  But it grows as they get older – and leaps up after a couple of decades.

These two trends encapsulate what the PP is about.