The Good Life and productivity

The Good Life and productivity

I’ve been reading How Much is Enough?, a thought-provoking tract for modern times by Skidelsky pere et fils.  Robert Skidelsky is an economic historian who has written with massive authority on Keynes and his legacy;  Edward is a philosopher.    Robert is giving a public lecture tomorrow (25/3) at the Working Mens College, part of an excellent series which the College has been running over past months (declaration of interest:  I chair the WMC governing board.)

The Skidelskys’ challenge is to the dominance of GDP and income as dominant measures of how well we are doing, as individuals and as a society.  They make trenchant and, to my mind, effective criticisms of current economics as a supposedly value-neutral discipline, and argue instead that we should be open about debating the values which underpin our choices.  As they say: “It is only our impoverished public language [impoverished by modern economic thinking – TS] that denies that the state has to make ethical judgements on a wide variety of matters.”

These ‘matters’ include working time.  The subtitle of the book is The Love of Money, and the Case for the Good Life.  The inspiration for it is Keynes’ wrong prediction that by about 2030 average working hours would have fallen to about 15 hours a week – because productivity gains would have enabled most of us would have satisfied our material needs (he was talking about the UK, not the world), and so we would be free to devote most of our time to other activities.

Keynes greatly underestimated capitalism’s ability to generate new ‘wants’, which is why most of us carry on working quite long hours, and some of us, even those who patently do not ‘need’ to (because they have big incomes), work very long hours.  Just last week a report from Eversheds, a city law firm, suggested that many young lawyers are rejecting the traditional long-hours culture of the law.   This is right on the PP nail, since it  excludes many women from rising beyond a certain level. 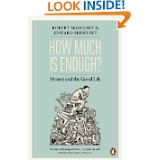 I’ve addressed the  general issue of  reduced working time more than once in previous posts.   The Skidelskys are aware that they risk being accused of paternalism in arguing that people’s current economic behaviour – their spending patterns and apparent desire for ever-increasing income –  does not reflect their real ‘needs’ or even ‘wants’.  But they are unrepentant in saying that it is time we challenged the spurious neutrality of modern economics-dominated thinking.

Their final chapter is titled ‘Exits from the Rat Race’.  It contains suggestions on how we might shift general behaviour in favour of ‘valuable’ activities and away from consumption.  The proposals include a progressive consumption tax and a move to a basic income, available to all citizens, which would make it easier for people to work part-time.

Productivity is central here, as it was for Keynes.    The ‘productivity paradox’ is starting to gain attention – though I suspect a lot of us shy away from the word, for a variety of reasons – as we try to figure out how employment has stayed quite high whilst the economy is trudging through the mire.  The answer – or part of it – is that we have generally very low productivity, so we employ more people, but at low wages (and with high vulnerability).  Before proposals for a basic income are dismissed as pie-in-sky, it’s worth noting  how much more productive we could be, if only the people with capital would invest it productively and managers would manage their resources effectively .

So let me make the suspiciously simple  link to the PP:  many women work below their level of competence;  productivity is low;  enabling more women to work at their level of competence might therefore be linked rather closely to raising productivity .  Just too simple?   Maybe, but since women have far less trouble than men in thinking about working part-time, it looks to me like a link worth making.    I look forward to putting the question to Robert Skidelsky tomorrow night.