What does ‘closing the GPG’ actually mean?

What does ‘closing the GPG’ actually mean?

I’ve been trying to get a handle on what kind of progress has been made in closing the gender pay gap, and this has led me to ask myself what ‘closing the gap’ actually means.  It seems to me that the obvious ‘zero gap = equality = fairness’ may disguise something important.

The Paula Principle is about the due recognition of women’s competences, and I’m mostly interested in career trajectories over time, ie what kinds of progression women make.  But pay is obviously the most available indicator, and the ONS has recently published some important data on trends over time on the GPG.  (By the way, I want to say ‘chapeau’ to the ONS for excellent graphic presentation – even though I feel they assume too much that full-time is the norm.)

There were some striking differences in the way the ONS report was covered.  The Times was gloomy:  “Gender pay gap won’t close until 2073“, whereas the FT was much more upbeat: “Gender pay gap close to elimination”.  Both papers gave attention to the fact that for full-time workers in the 20s and 30s, the pay gap had dropped to under 1.5%.  The graph below shows this strikingly. 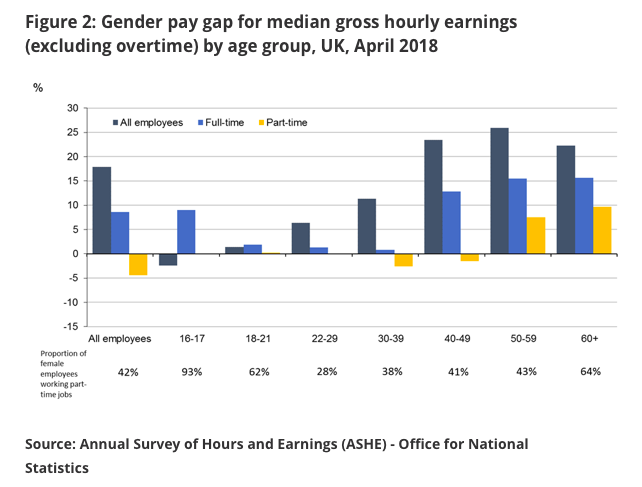 We’re dealing here, of course, with different cohorts as well as different age groups.  But it’s clear that for the most recent cohort, in the youngest age bracket, the GPG has almost disappeared –  for full timers.  For older workers it’s very much still there, as the chart shows, at over 15% for those aged 50+.

However my focus here is on what it actually means to say ‘the GPG has been eliminated’.  The assumption is that when we get to zero – ie when every bar shrinks all the way to the horizontal line – then the issue is settled.  Job done. And of course in one sense it will have been – even if that’s still a long way off.  But the whole point of the PP is to show that we do not have symmetry in qualifications and skills.  Women are way ahead, in the initial qualifications they achieve and the way they go on learning as adults.  The competence gap continues to grow.  So although it is good to see the pay gap ‘closed’ in the simple (or fairly simple) numerical sense, I’m not clear that that is what the final goal should be.   Given the difference in the competence levels of women and men, shouldn’t we expect there to be a negative pay gap overall, eventually?  This would be the pure meritocratic expectation, wouldn’t it?

I’m not for a moment suggesting we change the vocabulary.  The publication of GPG data has pushed the debate forward a lot, and we need to keep the focus as simple as possible.  But it is worth bearing in mind that the horizontal line does not actually represent an ideal.

The ONS report has another very striking figure, on regional variation.  For the period 1997-2017, the GPG actually stood still in London, at 15%.  In Northern Ireland, by contrast, the picture changed dramatically, so that it is now the only part of the UK where women earn more than men (see below).  That’s a pub quiz winner for you, and should wipe any complacency from us metropolitan smoothies. 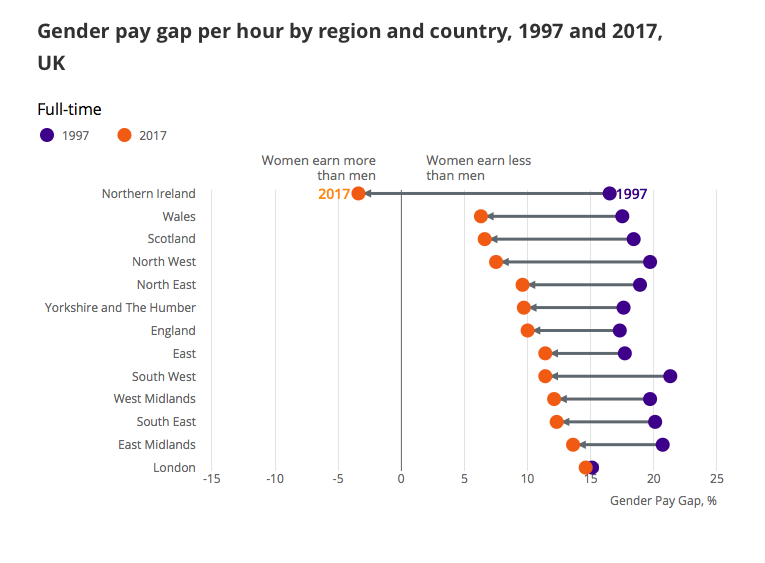