I’ve been involved in several conversations recently about the shape of careers, and how there is still a lot of work to be done to move beyond the traditional male model of a continuously ascending line, peaking probably around 50 and then sliding downwards.  Of course this doesn’t accurately represent millions of men’s working lives, but it’s still the model that dominates our thinking, consciously or not.  It sidelines all those whose careers might be moving up a grade or three later in life.

The most recent conversation was at ShareAction, which does excellent applied work influencing corporate behaviour across a range of issues – most prominently on environmental issues, but now increasingly on gender.   ShareAction is now paying more and more attention to institutional investors such as asset managers and pension funds:  how to influence their behaviour, eg on gender equality, so that they in turn will bring pressure to bear on the companies they invest in.  This seems to me a very shrewd way of increasing impact.

The conversation yesterday focussed on what key questions to ask asset managers and institutional investors.  Some of the questions are very familiar, though none the less necessary for all that, eg do their recruitment procedures reflect good practice, do they have a mentoring scheme etc.  One issue which emerged, though, was how far these questions focussed on enabling more women to fit in to an existing career structure and work culture which may or may not be appropriately designed.  Instead, maybe we need to ask questions about those structures and cultures: whether they reflect particular preferences which may not actually be organisationally efficient as well as impeding women’s progression.  In particular, many women may be better suited to a double-jointed career path, which levels off around 30-40 (very roughly) but turns up again after 45.

The next day I came across fresh evidence on this, from a HBR paper by Jack Zenger and Joseph Folkman .  They look at leadership, drawing on data from many thousands of 360o reviews.  Their central conclusion is that women are rated more rather than less effective as leaders.  I’ll come to a couple of interesting aspects;  but they include two charts which make exactly the point about gender differences in career tr 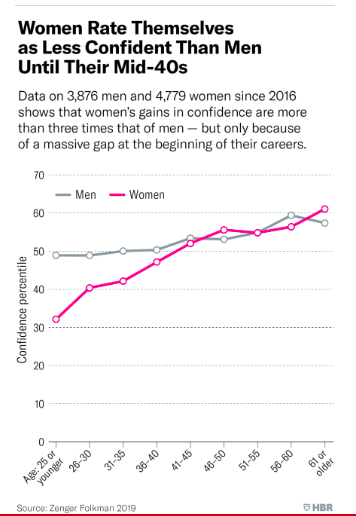 Although there is increasing gender equality in the first part  of many professional careers, the first chart shows how women still rate themselves as less confident until well into mid-career.  By the way this doesn’t necessarily mean they are lacking in confidence;  it could be – it could well be – that they just have a more accurate idea of their own competences.

Anyway, we then see that men’s confidence declines over time.  In some cases, to be a little harsh, this might be because they have come to realise that they illustrate the Peter Principle, and have been promoted beyond their competence level.   Or they just have come to a more realistic view of themselves.  Either way, the crossovers are striking. 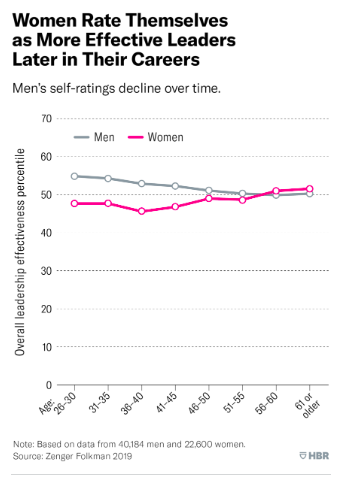 The two capabilities where Zenger and Folkman find that men are rated higher than women are ‘develops strategic perspective’ and ‘technical or professional expertise’.  On all the others, from ‘bold leadership’ and ‘motivates others’ to ‘communicates powerfully’, women were seen as outperforming men. Strikingly, the largest gap was in ‘taking initiative’ where women scored 55.6 compared to men’s 48.2.  Amongst the other top differences were ‘practices self-development’ (54/8/49.6) and ‘develops others’ (54.1/49.8).

In short: a) women go on building human capital across the life course;  and b) the trajectories of their careers, as leaders but not only at that level, differ considerably from the conventional male pattern. So let’s have a broader view of when and how progression should be happening.  And let’s think about what I called in the PP ‘reverse convergence’ – enabling more men to follow unconventional career patterns.