An excellent piece by Anne-Marie Slaughter in the FT highlights how we need to change the way we visualise career trajectories.  I was greatly impressed by Slaughter’s book Unfinished Business, in which she explores the reactions to her decision to leave a very high profile political job, as director of policy planning in Hilary Clinton’s State Department, in order to return to a more ‘normal’ family life in New Jersey.  This was prompted by the difficulties in reconciling parenting of teenage children with an all-consuming job – in spite of having a husband who took major responsibility for the children.

Slaughter’s decision triggered a huge reaction, much of it bitterly critical.  I very much liked the way she dealt with this in the book, and admired her courage in making the decision in the first place.  (Incidentally, she was hardly giving up on a career; she returned to a major academic position, as Professor of Politics and International Affairs at Princeton University – not exactly a low-grade billet.)  But this post is about Pelosi, not Slaughter.

Pelosi became the first woman Speaker in the House of Representatives, in 2007, and regained this position in 2017.  She has five children, and first entered Congress only when she was 47.  She is now 79.  Wholly atypical, of course;  but she also symbolises a very significant and very widespread trend, of older women resuming  or even taking up a career in what might be considered mid or even later life. 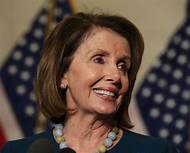 Slaughter cites Bureau of Labor Statistics figures:  in the decade between 2016 and 2026 some 6m women will join the US labour force, and of these about 3.6 million will be over 55 – the fastest-growing age-gender group.  Set that against the projected decline, of 3%, in the participation rate of men in the same age group.

This is central Paula Principle territory.  When I first started writing about it, older women were still, just, less qualified than men.  Now that has changed, and as generations move along the qualifications and competence gap will become more and more apparent across the life course, as it already is for those in the younger age groups.  But the classic career trajectory is still one that rises early on, and never plateaus, let alone dips.  We need a much more diverse palette of career paths, with a wide variety of starting points, of deviations, and of gradients, in order to match opportunities better to competences.  These career trajectories have to include professional as well as political ones starting at 50 or later.  (Camilla Cavendish’s recent book Extra Time tackles the challenge of longer working lives crisply and well, but she treats the extra time as involving mainly an extension of existing careers, rather than a remodelling of working across the life course.)

I don’t actually know what Pelosi’s formal qualifications are.  Nor would I dream of assessing her informal competences.  But after Donald Trump walked out of a meeting with her because she wouldn’t give him money to build his wall she said:

I’m the mother of five, grandmother of nine.  I know a temper tantrum when I see one.

That kind of experienced good sense cheered me up no end after days of over-exposure to her president.