My PP book will be published on March 8 – International Women’s Day.  So it was with particular interest that I read in Richard Evans’ magisterial account of the C19, The Pursuit of Power, that IWD was founded in Copenhagen in 1910, by Clara Zetkin. 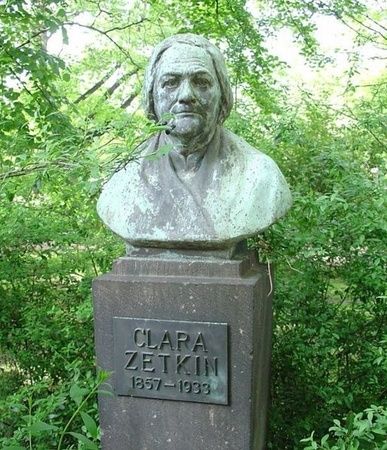 Zetkin was obviously a powerhouse.  She was born in Saxony, daughter of a German schoolmaster and his highly educated French wife.  She travelled for a while around Europe with the Russian revolutionary Ossip Zetkin, and later married an artist 18 years younger than she.  Back in Germany she took over a feminist magazine, renamed it Die Gleichheit (Equality), and took its circulation up to 125,000 by 1914.  That’s impressive by anyone’s standards.

The lead-up to the IWD (as I understand it from Evans) was marked by frustration at the hostility shown by the SPD and other socialist parties towards women’s issues.  It’s not clear what influence it had, though the years immediately following its foundation saw women in Europe and the US demonstrating for votes for women.  It would be good to know more about how IWD’s impact has changed over the years.

As for Zetkin, the older she got the further she moved to the left, joining Rosa Luxembourg, whose line was that women’s issues were a distraction from the revolution.     But she left behind some memorable sayings, including

When the men kill, it is up to us women to fight for the preservation of life.

In one sense, plus ca change;  though I’d hope more men now might move from killing to preservation.