Melvin Konner has written a highly original book, with an unusual message.  It pursues a similar theme to the Paula Principle, but much more broadly and with a completely different level of expertise.

The subtitle of Women After All  is ‘sex, evolution and the end of male supremacy’.  Konner predicts – and advocates – the future supremacy of women.  He opens with a quite striking proposition:

This is a book with a very simple argument: women are not equal to men; they are superior in many ways, and in most ways that will count in the future.  It is not just a matter of culture of upbringing, although both play their roles.  It is a matter of biology and of the domains of our thoughts and feelings influenced by biology.  It is because of chromosomes, genes, hormones, and nerve circuits.

Konner is an anthropologist with a medical background, and an evolutionary perspective.  This enables him to combine a strong awareness of how cultural factors shape our attitudes to gender with an understanding of how our biological and genetic make-ups underpin important differences in men and women’s identity and behaviour.  For me he strikes exactly the right balance in weighing a very extensive body of evidence (I’m judging now by the book’s clarity and plausibility  – who am I to  pass any scientific judgement on his review?) so that we get a sense of what is possible, and what long-run forces will shape the future.  He also writes directly and with humour. 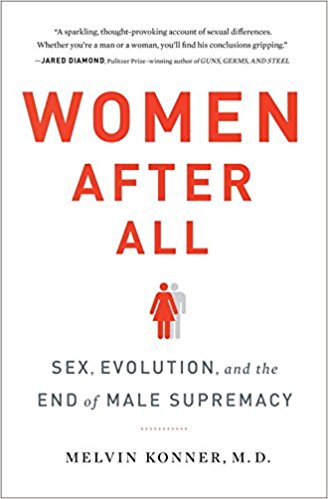 The overall line of argument is simple, though the book covers a huge range of complex findings.  Women and men are different in certain key respects, notably in women being less shaped by inbuilt drives towards sex and violence. There are evolutionary pressures that now favour the competences that women have in greater measure than men.  In the deep past, in small hunter-gatherer groups, there was greater equality between the sexes, but when we moved to pastoral societies with larger groups and then to industrial societies men came to dominate the hierarchies that emerged.  In the last 100 years women have made significant progress in emerging from under these forms of patriarchy, and are now poised to run the world, which they will do differently from men.  This will be for the good of all.  Even for procreation males will be needed less  – though I don’t think Konner actually thinks it would be a good thing if they/we disappear.  I didn’t read the book as  at all anti-male.

The author is well aware that he risks offending many groups, for very different reasons:  feminists because he insists on the biological nature of some gender differences; creationists for obvious reasons; people who worry that many young men, especially from poorer backgrounds, have diminishing opportunities to achieve meaningful roles; and those who think women are not progressing but going backwards.  In my view he successfully rebuts all of these.

Much of the book is historical, indeed deeply historical, using evolutionary time periods.  But the final chapters brings us right up to date, with evidence on current changes in gender behaviour and performance, in the corporate world and outside. Konner refers, amongst others to Mary Barra, the CEO of GM, on whose pay I blogged much earlier.  He cites the evidence on business and political meetings being run differently when a critical mass of women are present, and the capabilities they tend to bring.  He gets right into PP
territory  when he points to the growing educational disparity between women and men.  The proportion of US households where the woman has a higher educational level than the man is now 23%, while the reverse is true in only 16% (since most people marry others of similar educational levels) and this gap can only increase.   But he doesn’t set the growing educational disparity against the sluggish decline in the pay and careers gap.

The PP points to the fact that superior education and competence does not always translate into recognition and reward at work.  The single most egregious example of this is South Korea, where women are the most educated of any country in the world but the pay and careers gap remains obstinately large.  Konner refers to South Korea’s success in changing attitudes to sex selection of babies, but the country is still faced with major cultural challenges.   His book does give a sense of the underlying impetus behind the forces for change.  The more we can talk about the overall benefits to society, and not only about simple equality, the stronger than case will be.

And so to the future.  Apparently humans share 98% of our DNA with both chimps and bonobos.  Chimps are aggressive and male-dominated;  bonobos show much more collaborative tendencies between the sexes, underpinned by powerful female confederations.  Konner’s hope is that we can ‘bonobize’ humanity – a nice idea indeed, though probably not a winner as a political slogan.  “Male domination,” he says

has outlived any purpose it may once have had.  Perhaps it played some role in our success as a species so far, but it is now an obstacle.  Empowering women is the next step in human evolution, and as the uniquely endowed creatures we are, we can choose to bring it about.

There are choices involved.  Agreeing that certain parts of men’s and women’s behaviour are biologically shaped does not rule out choice;  it helps us define these choices more clearly.

I should say by way of conclusion that I enjoyed reading a book on this topic by a man.  Konner has two daughters and a stepdaughter, all of which I have, and a son, which I don’t.  Part of his argument is that many men will find that they have better options in a world run by women.  In a more limited sense I argue the same in the PP – that at least some men don’t want to feel obliged to keep climbing the career ladder.  That’s an interesting line of conversation to pursue, and an evolutionary perspective certainly helps.