Universal Credit and the dominance of the full-time model

Universal Credit and the dominance of the full-time model

Universal Credit must be high up on the list of policy initiatives which begin with a laudable goal and end up pointing in the wrong direction. The goal of simplification, streamlining the  mad proliferation of benefits, is obviously desirable, but there is increasing evidence on the potentially devastating impact it will have on the more marginal members of society.

Most of the recent press attention has concentrated on the impact of the 6-week delays in payments on families that have no resources to fall back on.  But now more of us are becoming aware of other implications – see the powerful piece by Pilgrim Tucker in the Guardian .  I’m far from grasping the full detail, but I was particularly struck by thy one aspect, which is particularly relevant to the Paula Principle: workers on low incomes are expected to be working for 35 hours a week at the equivalent of the national minimum wage,  If they are working fewer hours, they will be ‘incentivised’ to work more.  I assume this means that they will lose benefit if they don’t.

This rule has direct, harsh, consequences for the incomes of poorer families.  But it also reflects a perception that it is really only ‘full-time’ jobs that count.  This is not only at odds with the realities of today’s labour market, with its myriad of working patterns.  It also reinforces the erroneous assumption that only people who work full-time are wholly committed to their work.  This is, as I continue to argue, a fundamental reason why the Paula Principle operates as it does, and why we will not see women able to make full use of their competences.  It is the male model, and it’s not fit for purpose, at least not as the paradigm of working time.

This is particularly unfortunate, as UC has the potential to solve one of the problems which affect women more than men.  Moving in and out of the labour market can cause terrible confusions, as benefits disappear and are not regained, and perversions, as ridiculously high marginal tax rates fall on people trying to move into employment.  Clear and fair lines of sight for people building careers that involve periods out of full-time employment are a critical necessity.

Just this week we had some further evidence from the ONS on how working hours vary, set nicely in the broader context of overall time use by women and men.  There is a wonderful survey carried out on a European basis (sic…how much longer??) which deals with how people divide up their 24 hours, between paid and unpaid work, leisure, social activities and so on. 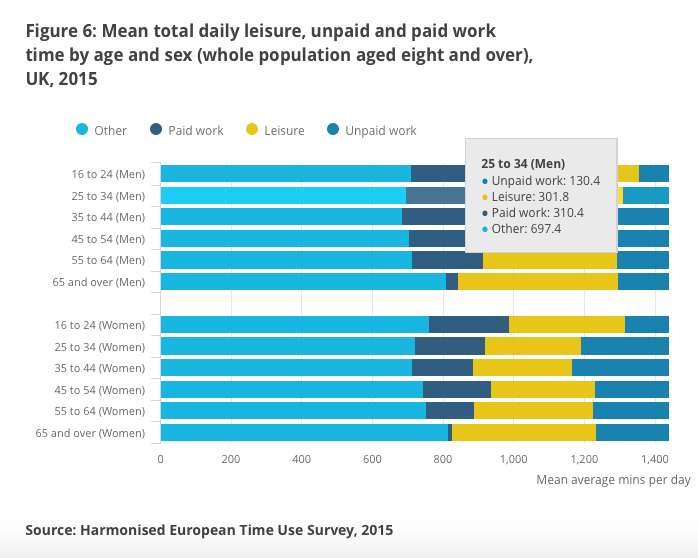 It’s no surprise to find that men a) took more leisure than women, spending more time playing sport and doing their hobbies, whilst b) women spent more time on unpaid work, primarily domestic.  (At the same time, it’s worth noting, women managed to socialise more.)  The point here is that there are many many patterns of time mix, and rich sources of data to enable us to understand this;  and yet we continue to have policies that face in the opposite direction.   If we want people to be able to combine different activities, including important ones such as caring for other people and taking part in civic life, as well as being able also to put their competences to good use at work, the last thing we should be doing is bolstering the 35-hour week as a kind of universal template.